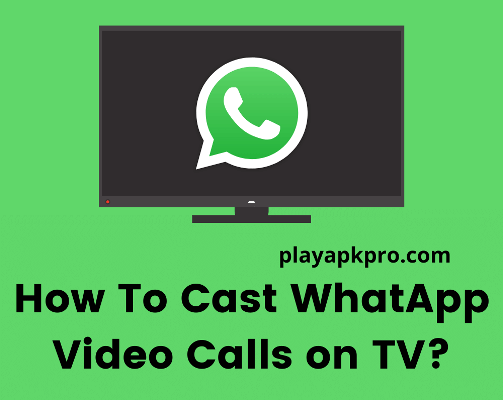 WhatsApp is a Google play store app primarily designed for messaging friends, family, and colleagues. The popularity of WhatsApp is increasing day-to-day because it is providing the basic tool of communication. In 2014, Facebook acquired WhatsApp and introduced new features such as video calls and audio calls.

You can also update the status on WhatsApp like Facebook and Snapchat. The app is available on almost all devices such as Android, iOS, Mac, and PC. But many features are yet to be added. One of them is being able to cast WhatsApp on your smart TV.

If you want to cast a WhatsApp video call on a big screen, you can do it with the help of Google Chromecast. However, at times, it gets difficult to see everyone on the small screen of your phone. So, let us discuss the steps to screen mirror the WhatsApp video call to cast on TV.

As you know, WhatsApp does not provide the in-built cast option, while Facebook has this option. However, you can cast WhatsApp video calls, audio calls, messages, or anything you want on your TV due to Chromecast.

I hope you are not expecting this, but screen mirroring is just an amazing and charming option. So, there are three ways to cast a WhatsApp video call on TV, which we discuss below:

Most Android devices come with the option of an in-built cast that helps you to screen mirror the Android on your TV. Follow the steps carefully given below to mirror your screen on Android.

Connect your Chromecast device and android device to the same Wi-Fi network. Otherwise, you will not be able to mirror your screen on a TV.

You can mirror your Google browser on your PC to your TV by following a few steps mentioned below. First, make sure that Chromecast and desktop are connected to the same network.

In addition, you can enjoy the landscape view of the video through this Chrome casting because, in mobile phones, you have to tilt for better viewing.

No votes so far! Be the first to rate this post.